Me and My Man

Me and The Boy

Every year, we–me, The Boy, and his buddy–take an annual trip to Sacramento to attend Aftershock. It started way back in September 2013–in a thousand degree heat! (Okay, it wasn’t that hot but 100 degrees in Sacramento will steal your breath away. Thank GAWD they moved it to October. The weather was perfect!) The Boy and his buddy, who were sophomores in high school at the time, conned me into taking them by myself. My Man had opted to stay home and watch college football, where I desperately wanted to be.  I did not know what I was in for, especially when a tire blew in the middle of the Sierra’s. We limped into Sacramento late Friday night, got the last room available with two queen beds and collapsed. The headliner that year was Avenged Sevenfold, and since then, I’ve been lucky enough to see them three times!

The two-day concert was one of the most exhausting, yet exhilarating experiences I’d ever had. Now, six festivals later, My Man committed to attending both days. Every year, we buy VIP tickets because, frankly, I’m old and I’ve found that crowds can get to me, i.e. I suffer from panic attacks every now and then. With a VIP ticket, I can escape the worst of the moshers, shovers, and uber-friendly concert goers to get my bearings and breathe. This year the headliner was System of a Down, and The Deftones. You can find the entire line-up here. There were record crowds and the venue was expanded to accommodate the sold-out festival. I was able to obtain VIP tickets for Saturday, but not Sunday. Needless to say, by day two, I really wished I had that VIP space to hide in. Luckily, My Man is the best man in the world, and he made sure I had the space I needed when that soul-sucking attack reared its ugly head. Once he fed me, and hydrated me, we joined our son for Alice in Chains. By far, the funnest set of the day! Here’s a picture of three dorks before the show… 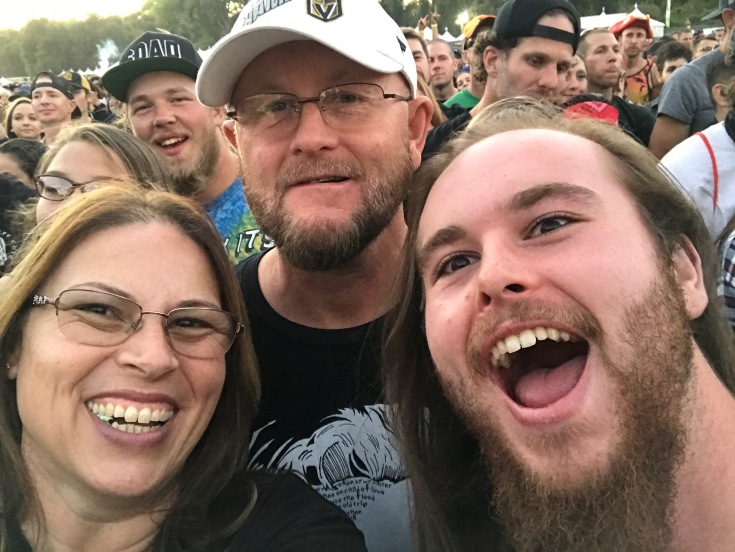 I don’t have a clue who’s playing next year, but if you’re in the Sacramento area, or if you just love to bang your head, give it a try. You won’t regret it.

Author of the King Brothers Novels, published by Windswept, a division of BHC Press.